Register for our Events 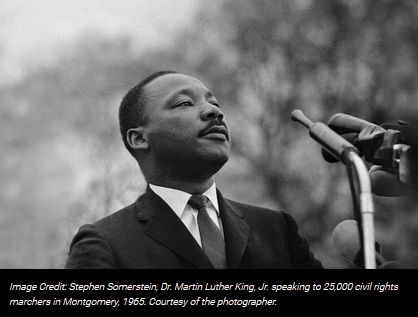 The CHS will host a media opportunity ahead of opening its two newest exhibitions, Freedom Journey 1965: Photographs of the Selma to Montgomery March by Stephen Somerstein and Connecticut Freedom Workers: Remembering the Civil Rights Movement.

Join us for a press event featuring LIVE remarks from CHS Chief Curator, Ilene Frank and CEO, Rob Kret. Media are invited to view the two exhibitions that will debut on January 29.

This event will be held in-person, in the 2nd-floor galleries of the CHS, located at 1 Elizabeth Street, Hartford, CT 06105.

Freedom Journey 1965: Photographs of the Selma to Montgomery March by Stephen Somerstein

This exhibition features Stephen Somerstein’s stunning and historic photographs documenting the Selma to Montgomery Civil Rights March in March of 1965. Somerstein was a student at City College of New York and picture editor of its student newspaper when he traveled to Alabama to document the march.

He joined the marchers and gained unfettered access to everyone from Martin Luther King Jr. to Rosa Parks, James Baldwin, and Bayard Rustin. “I had five cameras slung around my neck,” he recalled. During the five-day, 54-mile march, Somerstein took about 400 photographs including poignant images of hopeful Blacks lining the rural roads as they cheered on the marchers walking past their front porches. He also captured whites crowded on city sidewalks, some looking on silently and others jeering as the activists walked to the Alabama capital. Somerstein sold a few photographs to the New York Times Magazine, public television and photography collectors, but none were exhibited until 2010, when he participated in a civil rights exhibition at the San Francisco Art Exchange.

Rather than pursuing photography as a career, Somerstein became a physicist and worked at the Harvard-Smithsonian Astrophysical Observatory and at Lockheed Martin Company. It was only after his retirement in 2008 that he returned to his photography, realizing that “I had numerous iconic as well as historic photographs.” Among those images were his moving photographs of that memorable march to Montgomery in 1965.

This exhibition has been organized by the New-York Historical Society.

During the 1960s, people of various races, religions, ages, genders, and classes contributed to an integrated civil rights movement—in Connecticut and around the nation. This exhibition shares stories, artifacts, and images of Connecticut freedom workers who supported the movement at home or by traveling south to participate in sit-ins, protests, and marches, including the 1963 March on Washington and the 1965 Selma to Montgomery March.

Registration required for all who wish to attend: please email Marissa Baum, Marketing and Communications Manager at [email protected].

If you are unable to attend, this event will be recorded and can be sent to you upon request.

You are also welcome to schedule a visit and interview with CHS leadership at another date, to do so please email Marissa Baum, Marketing and Communications Manager at [email protected].

More information on COVID-19 guidelines and protocols for visitors is available here.

The Connecticut Historical Society (www.CHS.org) is a privately funded, independent, not-for-profit educational organization that includes a museum, library, the Edgar F. Waterman Research Center, and the Connecticut Cultural Heritage Arts Program. Founded in 1825, the CHS is Connecticut’s statewide historical society, and a Smithsonian Affiliate. At the CHS, we cultivate understanding of the history and culture of Connecticut, and its role in the United States and the world. Through our collections, research, educational programs, and exhibitions we reflect the past, actively engage with the present, and innovate for the future.